JAMAICA | Opposition PNP Warns of the Onset of Food Poverty, Points to high cost of food

KINGSTON, Jamaica March 12, 2022- Opposition spokesman on Finance Julian Robinson has  pointed to the continued rise in food prices as evidence of the hardship being inflicted on the Jamaican people, and has appealed to the government to relieve their suffering and the cost of living by 'narrowing the gap and uplifting our people."

Opposition spokesman on finance Julian Robinson outlining to parliament the rising of prices in the cost of food items to the Jamaican public.Making his reply to the government’s budget proposal, Mr. Robinson said the “ country has been experiencing a cost-of-living crisis which is set to become worse based on the situation in Ukraine.”

He explained that  “the cost-of-living crisis is the result of significant increases in the prices of basic food items, increases in the cost of gasoline and electricity, and increases in taxi fares in an environment where many have not recovered financially or physically from Covid. The Jamaican people are suffering,” Mr. Robinson lamented.

He said while “the data from government indicates that the annual inflation rate will be in the range of 8 to 9 per cent, consumers are faced with price increases significantly higher than that.”

The Opposition says “In just the past year: from January 2021 to January 2022, according to the Consumer Affairs Commission, the people have been subjected to increases of up to 40-odd per cent, and this is just in basic food items. 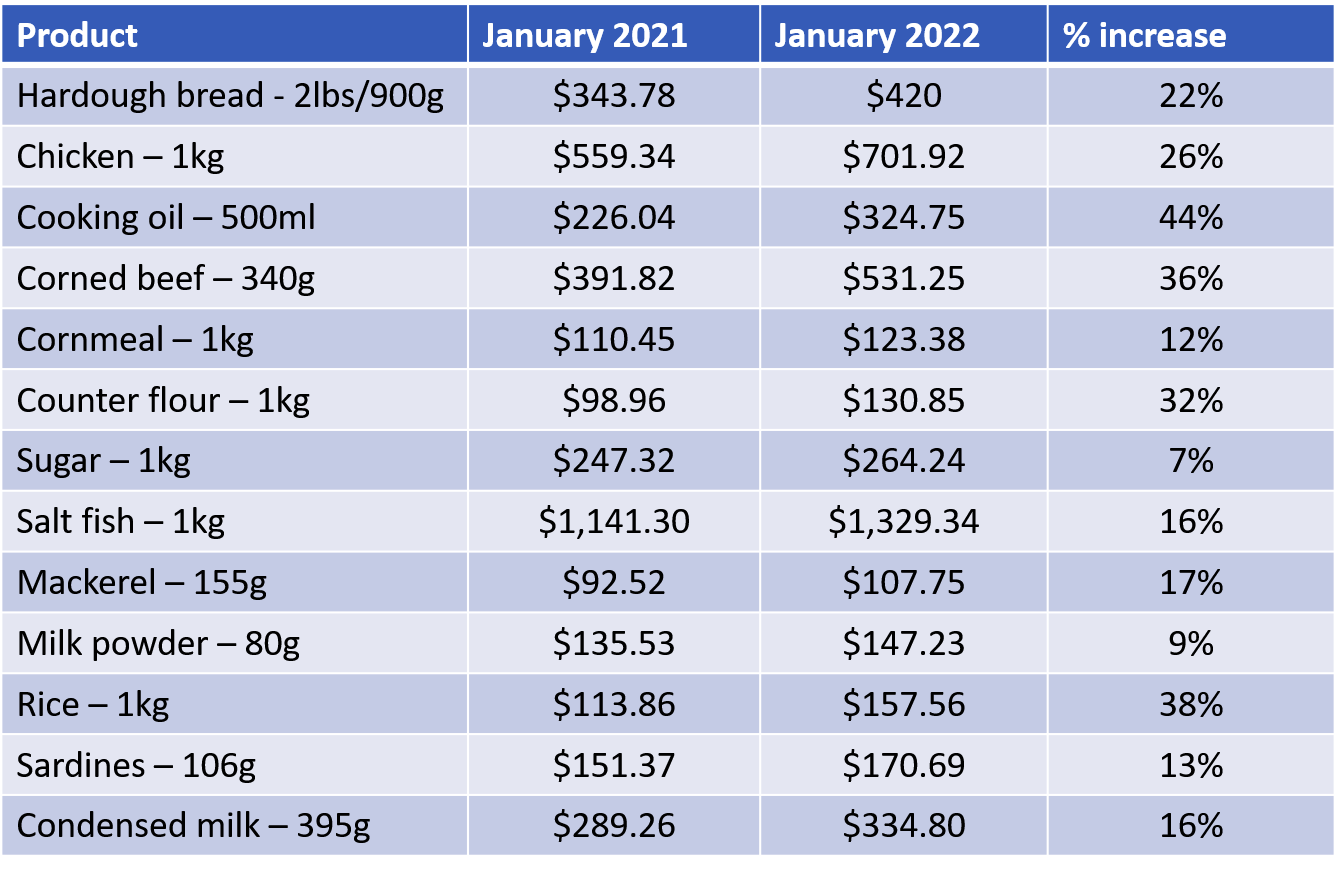 “Looking at these increases, how do we expect the people who earn the least to do the most basic thing for their survival: which is to eat? How do we expect working people to maintain their health and their dignity when they cannot afford to feed themselves and their families? How do the children learn? Madam Speaker, the Government needs to narrow the gap and uplift our people. Too many people are suffering!” Robinson told his colleagues in the parliament.

The Opposition spokesman on Finance warned that prices are expected to move even higher imposing greater levels of food poverty on Jamaicans, as these are January 2022 prices and in the past two months, most of these prices have gone up higher than what is reflected in the Chart.”

Patty, which used to be poor people's food, is now $220 each. If you buy 2 patty and a box drink you might as well buy a box lunch!”Robinson further warned that “many [prices] are expected to go up even more, as the conflict between Russia and Ukraine, which together account for some 25 percent of world wheat production continues to rage.

Flour will go up; Bread will go up; Bulla will go up; Tough crackers will go up; Patty, which used to be poor people's food, is now $220 each. If you buy 2 patty and a box drink you might as well buy a box lunch!”

“Madam Speaker, in his presentation the Minister made a big dramatic announcement: “no new taxes”, he said. The reality, however, is that the Government does not need to impose any new taxes as it will be collecting a lot more taxes as oil prices rise and inflation skyrockets.

“To the ordinary Jamaican, the effect of the increases in everything from food, to electricity, to gas at the pump, feels the same as a new tax. Call it macka or call it prickle, when it jook you it hot same way !” Robinson lamented.

Pointing to the rise in oil prices,  Robinson said "As oil prices rise, the government collects more taxes. The ad valorem tax is a variable rate tax which means it moves with the price of gas. It is calculated as 10 per cent of the ex-refinery price plus the Special Consumption Tax. So, a higher gas price means more taxes and, in fact, since this Budget was based on oil prices of US$67.50, the Government earns a windfall in revenue as oil prices remain above this level. It is the poor consumer from whom more is sucked out.

In 2019, this same Minister said inflation is the worst tax on the people. He said, and I quote: “Nothing destroys economic independence as much as high, runaway inflation. High, pervasive inflation of the past has ruined tens, maybe hundreds of thousands of lives in Jamaica and the primary and secondary effects of high inflation have also devastated thousands of businesses”.

We agree with you on this Minister! Inflation is most cruel tax as it affects fixed income earners the most. As inflation rises, the Government collects more revenues. Let me use a simple example to illustrate this point. If last year the price of a pen was $100, the Government would collect $15 in GCT as the rate is 15 per cent.

When the price of the pen moves to $150 this year, the Government collects $22.50 (15 per cent of $150). So, if we take this example across the wide range of goods and services, where prices have increased, we can see how the Government will collect much more in tax revenues, without the need to introduce new tax measures. Macka or prickle, you get jook same way," he points out.