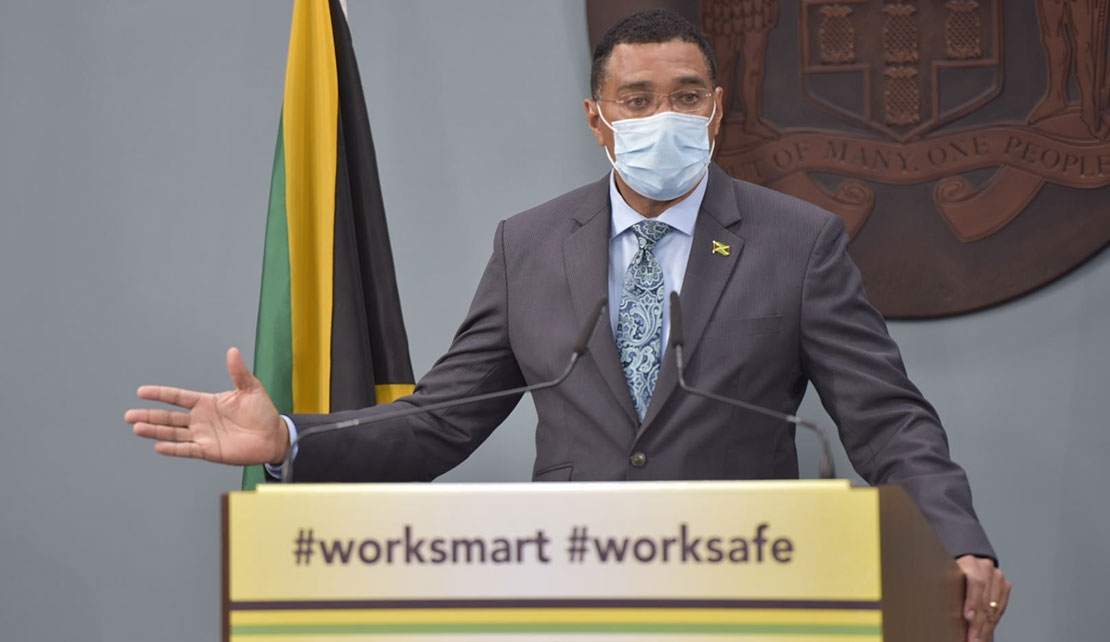 KINGSTON, July 26, 2021 - With Jamaica’s COVID-19 figures going in the wrong direction, and an increase in hospitalisations and Coronavirus cases, Prime Minister Andrew Holness said he had no choice but to tighten the island’s COVID-19 restrictions.

Health Minister Dr. Christopher Tufton, told Monday’s press conference that the  government was concerned that the country's key COVID indicators are all increasing.

He said the transmission rate has moved from "medium to very high in a matter of days." There is also an uptick in the positivity rate, which was at 18.1 percent on Sunday with a seven-day average of 13.5 per cent. He pointed out that, ideally, the country should have a positivity rate of five per cent and lower.

Jamaica's reproductive rate has also risen. That rate, which was at one point as low as 0.7 - a level the health minister said was "relatively safe" - had risen to 1.1 early last week and is now at 1.4.

Dr. Tufton noted that "values above one mean that the epidemic will grow exponentially if corrective action isn't taken."

The geographic spread of COVID is also increasing, as new cases are being reported in more communities across the country. Some 306 or 39.6 per cent of 783 communities had recorded COVID-19 cases, up from 29 per cent two weeks ago.

He said hospitalisations are on the rise, moving from 215 two weeks ago to 298 and general hospital bed occupancy was cause for concern.

He noted that Seven hospitals are in the red alert zone with 84 per cent or greater occupancy, while four are in the amber zone with more than 74 per cent of bed spaces being occupied.

To date, the Delta strain has not been identified in Jamaica. Dr. Tufton said 380 samples have been tested so far and results are being awaited for other samples. But he reiterated that the country must continue to "assume [the Delta variant] is here."

It was against that background that  Prime Minister  Holness announced a number of revised measures, including changes to the curfew hours.

Additionally, Mr. Holness said the capacity limit will be reduced from 70 per cent to 50 per cent for establishments such as gyms, bars, restaurants, and churches.

Small events, which had been permitted to have 100 people in attendance or 60 per cent of the venue's capacity, will also see a slight change. They should have either 100 people or 50 per cent of venue capacity, whichever is lower.

The Prime Minister said the adjusted measures will expire on August 10.