Prince Harry and Meghan are also giving up their royal patronages. The announcement follows weeks of speculation over their future as the one-year review of their position, announced at the time they moved away from the UK, neared. 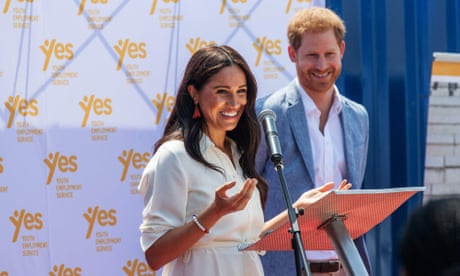 In a statement, the palace said: “Following conversations with the duke, the Queen has written confirming that in stepping away from the work of the royal family it is not possible to continue with the responsibilities and duties that come with a life of public service.

“The honorary military appointments and royal patronages held by the duke and duchess will therefore be returned to Her Majesty, before being redistributed among working members of the royal family.

“While all are saddened by their decision, the duke and duchess remain much-loved members of the family.”

A spokesperson for the Duke and Duchess of Sussex said: “As evidenced by their work over the past year, the Duke and Duchess of Sussex remain committed to their duty and service to the UK and around the world, and have offered their continued support to the organisations they have represented regardless of official role. We can all live a life of service. Service is universal.”

The decision followed the 12-month review of the couple’s position, which was thrashed out at the famous Sandringham summit last year when Harry and Meghan indicated they wished to become financially independent.

Since then, they have signed lucrative contracts with Netflix and Spotify.

It also comes ahead of a much-publicised “intimate” interview with Oprah Winfrey, due to be broadcast by CBS on 7 March.

Sources said the decision was made after conversations between the couple and other members of the royal family.

More in this category: « Duchess of Sussex wins privacy case against the Mail Over 168 million children miss nearly a year of schooling, UNICEF says »