Education Minister Patrick Faber
BELMOPAN, Belize, Oct 5, CMC – Belizean teachers have voted to continue their industrial action for another two days, even as the government urged the Belize National Teachers Union (BTNU) to return to the bargaining table.

The Dean Barrow government said it was disappointed with the decision of the teachers, who have been out of their classrooms since Monday protesting the delay in salary adjustments as well as a series of other national issues.

Following a Cabinet meeting on Tuesday, the government said that the BTNU even though it had already acknowledged the proposed compromise on the three per cent salary adjustments had decided to embark upon the industrial action.

Government said the other issues could be dealt with as part of the next collective bargaining agreement exercise, for which a commencement date is yet to be fixed later.

“I am baffled at how they can bring me and the Ministry of Education into all of this as if it were they were negotiating directly. Remember these negotiations were a part of the three union negotiations, the collective bargaining agreement negotiations, which they were the ones who took out the salary adjustment and said we are going to take this matter directly to the Minister of Finance, the Prime Minister; that arrangement was an aside arrangement,” he added.

But BNTU president Luke Palacio the government has refused to say what it will give in exchange for the deferral since the money is there to pay.

“We are steadfast in our position. We have not given up and we will not give up on our three per cent salary adjustment, “he said, adding “that money is money that Government had raised from last financial year, so it’s not as if the unions are being unreasonable, or asking for anything that they do not deserve and was not there before”.

“We are saying we will not just give up our three per cent at the request of the Prime Minister for a deferral without him giving us back something for it. And the eight points are totally separate,” he added.

The BNTU said that it is stepping up its “Stand Up for Belize Campaign” and that the nationwide strike will continue for at least the next two more days – Wednesday and Thursday. 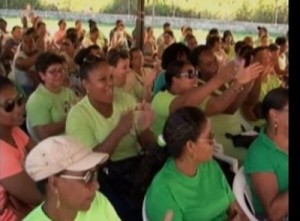 The decision to continue the strike was taken Tuesday and BNTU Belize District Branch president, Kathleen Flowers, said ‘we shall not be moved.

“Despite what will come up cause it will come with that announcement, we will stand out ground.  We are standing our ground until we get a feeling that we have a solid enough batter up to come in—not just a feeling, but we know where the feeling will come from because we are working a process.”.

She said the teachers are standing up for the country and urged other unions “to come on board.

“On Thursday we are doing out mass countrywide demonstration. As we speak, there are people working the machinery to make sure that that demonstration can be done within the legal parameters and framework of this country.

“And we have our elements of the public relations team preparing to get the word out because we are calling on every living person we know and are friends with. Parents, children, tertiary institutions, students, grandma, grandpa and their best cousins; everybody come out with them on Thursday because we are going to be doing a continued demonstration,” she added.

More in this category: « University of Guyana Shelf Plans to hike tuition fees by 5% OAS remains committed to electoral process in Haiti after postponement of elections »