Home Affairs Minister Patricia Gordon-Pamplin says the work permit renewal application failed because of inaccuracies surrounding Tweed’s name and marital status.
HAMILTON, Bermuda, Jan 12, CMC – A union threat to jeopardise this year’s money-spinning America’s Cup in Bermuda has been rejected by a large majority from all sections of the community, according to an opinion poll commissioned by the Royal Gazette newspaper.

Bermuda Industrial Union (BIU) president Chris Furbert warned last week that the showpiece sailing event — to be staged here in May and June in front of a huge global TV  audience, would be threatened unless the One Bermuda Alliance (OBA) government reversed its decision to refuse a work permit renewal for London-born Reverend Nicholas Tweed. 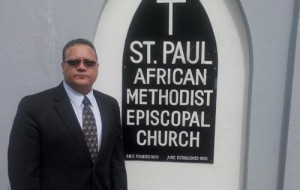 The new Gazette poll has found that, regardless of religious or political beliefs, age, gender, race, household income or union membership, opposition to the ultimatum is extremely strong.

Furbert insists that he delivered his demand to Premier Michael Dunkley on behalf of his membership, but of the 12 BIU members polled, 10 said they did not support it.

The survey took place between last Thursday and this Monday, following three days of protests and industrial action by supporters of 52-year-old Tweed, a fierce critic of the OBA government, which was elected in 2012, the year before the pastor arrived in the island to take up his AME post.

Among those describing themselves as African Methodist Episcopal (AME) Church members, 52 per cent believed Tweed, the pastor at St Paul AME Church, should be allowed to stay beyond his January 19 departure date, with 43 per cent saying he should not, and five per cent were unsure.

The telephone poll of 400 registered voters has a margin of error of plus or minus five per cent.

Tweed’s work permit refusal has dominated the headlines over the past two weeks, with pressure group the People’s Campaign, of which he is a leading member, joining Furbert and opposition  Progressive Labour Party in a series of attacks on Home Affairs Minister Patricia Gordon-Pamplin.

Gordon-Pamplin says the work permit renewal application failed because of inaccuracies surrounding Tweed’s name and marital status, while St Paul AME Church did not advertise the position to give a Bermudian the chance to apply.

Supporters of Tweed, who separated from his Bermudian wife, now headmistress of a leading school,  more than a decade ago, have claimed Gordon-Pamplin was politically motivated against him.

Furbert said unless Tweed’s work permit was renewed, and a controversial airport development project was taken off the table, he told the Premier “the America’s Cup in 2017 will be in jeopardy” and BIU members would not go back to work.

However, many members continued to work as normal, saying Tweed’s work permit was not a union matter, among other reasons. Tweed later responded angrily when his paternal links to Bermudian pastor Kingsley Tweed were brought into question, but refused to comment when asked if he was legally adopted by him.

Last Thursday morning, between 100 and 200 BIU members held a four-hour meeting, which ended in Furbert announcing they would go back to work, and that the union needed to deal with “in-house issues”.

The America’s Cup, being staged here for the first time, is expected to pump US$350 million into the island’s struggling economy. The national debt stood at $1.4 billion when the OBA took office four years ago. The debt has now grown to $2.4 billion.

More in this category: « US, Cuba meet to fight trafficking in persons TRINIDAD- Over three thousand child marriages in two decades – Attorney General »