LIALPA said that it had taken note of Gonsalves statement in Barbados last week where he claimed that the airline was facing many cancellations as a result of illness by flight crew.

The pilots’ association said that it was also disappointed in a statement by acting chief executive officer Mrs. Julie Reifer-Jones who earlier this month allegedly said the airline has enough cabin crew to fly LIAT’s schedule. 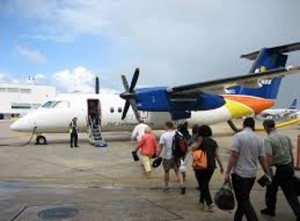 “LIALPA strongly refutes the statements made by PM Gonsalves and by Acting CEO Reifer-Jones as erroneous and totally false,” the association said, calling on the airline executive to retract the statement “because she knows without a doubt that her statements were dishonest”.

LIALPA said that LIAT is “woefully short of adequate crew to properly execute” its current flight schedule. It said over the last two years, “LIAT has not employed a single pilot, even though 31 pilots have left the company either because of retirement or resignation”.

It said 19 of those who have left were trained to fly the newly acquired ATR type aircraft.

“Management sat on their hands while this mass attrition of ATR pilots occurred, and did nothing to rectify the situation, and this resulted in the company losing all of the monies it invested in the training of these pilots. To be specific, the cost of training an ATR pilot is approximately EC$100,000 (One EC dollar =US$0.37 cents) per pilot, therefore this amounts to a total of EC$1.9 million dollars of training investment that has been lost”.

The pilots say the airline continues to schedule flights even though it is aware that there is no crew available for the scheduled flight, and it would inevitably be cancelled.

“This then leads to management asking the skeletal remaining crew to double their workload, and to work at maximum time with minimum rest. This is not a feasible model and it is just a matter of time before this operation model breaks down and flight cancellations increase even further.

“Flight cancellations are also occurring because LIAT has no reserve coverage on a daily basis and so a single pilot in a single island has to cover the operational model throughout the network. This is ludicrous and represents poor planning and incompetent management.

“LIALPA wants to categorically state that there is no abnormal sickness occurring among crew members. Presently, if a single pilot gets the flu and cannot fly, the sickness of that one pilot can cause several flights to be cancelled. What effectively run airline pleads on a regular basis with pilots, to work on their off days and personal vacation days?”

The pilots are also urging the public to question LIAT’s announcement of a projected two million dollars loss hinting at the possibility of political interference in the matter.

“LIALPA as always continues to reassure the travelling public, that we are committed and dedicated to serving you at the highest professional levels. We want to avoid flight delays and especially cancellations, but we simply cannot do so, due to a shortage of crew, poor working conditions and an incompetent management team.”