Bahamas Prime Minister Perry Christie
NASSAU, Bahamas, Feb 28, CMC – The main opposition Free National Movement (FNM) Tuesday urged opposition parties to form a united front in removing the Perry Christie government from office in the next general elections due to be held in May.

FNC chairman, Sidney Collie, confirmed that the party held talks over the last weekend with the Democratic National Alliance (DNA) “for the purpose of forging an agreement as to how we may work together to defeat the PLP (Progressive Liberal Party) in the upcoming General Election”.

But Collie said that the “discussions ended on Saturday last without a satisfactory resolution.”

“The Free National Movement is the only organized National Party that can defeat the PLP and we invite all organizations and Bahamians wishing to rid this country of the inept PLP to join with us in this cause to take our country back,” he said.

Earlier, DNA leader, Branville McCartney said his party would be contesting the elections as a single entity and that the population will simply have to make a choice among the three political parties.

“Going into this election will be the DNA, the FNM and the PLP,” he told the Nassau Guardian, adding “the good people of the Bahamas will have to make a decision as to whether or not they wish to remain the same, and if they do, that’s voting for the PLP and the FNM, or if they want positive change and that’s the DNA”.

McCartney said the DNA has given the voters a choice and “in a few weeks they will have to make a choice”.

He said the party had never thought of engaging the FNM as a partner saying “we are all in opposition, we are opposition forces and that’s it”. 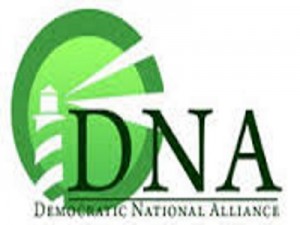 Meanwhile, Prime Minister Christie has urged supporters to vote back the PLP into office.

Campaigning on Monday night he said the FNM was incapable of unifying the country much less itself.

“We have to stay on the path of building a country that values and lifts up all Bahamians,” he said, warning “but we are risking placing this country in the hand sof people who can’t even keep a small group together”.

In the last general election, the PLP unseated the FNM winning 29 of the 38 seats contested. The FNM won nine seats and the DNA lost the only seat it had in Parliament.

More in this category: « GUYANA | Opposition Leader tight-lipped on whether he will contest next presidential election ST. LUCIA | Minister upset at leakage of government documents »