HAMILTON, Bermuda, Oct 4, CMC – A new tropical storm formed Tuesday to the south-southeast of Haiti even as all eyes are on Hurricane Matthew, the Category 4 storm that is battering the French-speaking Caribbean Community (CARICOM) country of Haiti.

In its 12.00 pm (local time) bulletin,  the Bermuda Weather Service (BWS) said Nicole — the 14th named storm of Atlantic hurricane season — was around 560 miles away from the island and moving northwest. 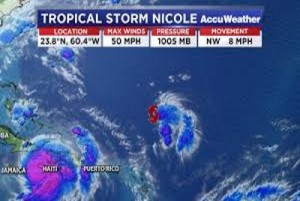 Nicole was packing winds of 50 miles per hour.

The BWS said Nicole is considered a “potential threat” to the island.

Tropical Storm Karl dumped around four inches of rain on Bermuda when it brushed the island 10 days ago but it caused no serious damage.

More in this category: « Matthew continues to pound Haiti as it moves towards Cuba Death toll associated with Hurricane Matthew increased to 11 »