And there could be more gold to come for her here as she now targets the 5000m.

The women's 10,000m was the first track final of the night ahead of the men’s 100m, won by Christian Coleman of the United States in 9.76, bettering his own world-leading mark by 0.05 as he finished ahead of 37-year-old compatriot Justin Gatlin, who clocked 9.89, and Canada’s Olympic bronze medallist Andre De Grasse, who took bronze in a personal best of 9.90. 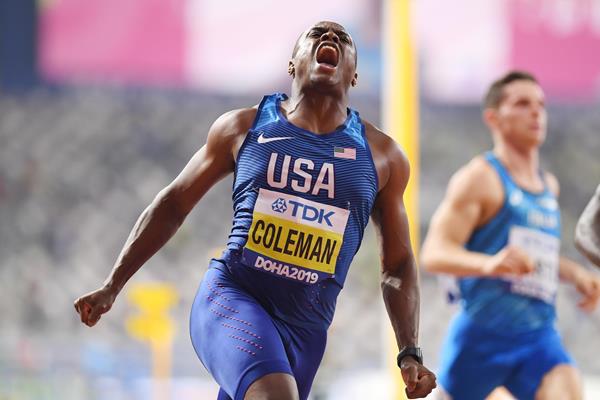 Hassan, who earlier this season broke a world mile record that was almost 23 years old before winning the IAAF Diamond League titles over 1500m and 5000m, won in a world-leading 30:17.62.

There was an unfamiliar winner in the men’s long jump too as Tajay Gayle of Jamaica lit the blue touchpaper by improving his personal best of 8.32m to 8.46m in the first round and then sealing victory with a fourth-round effort of 8.69m. 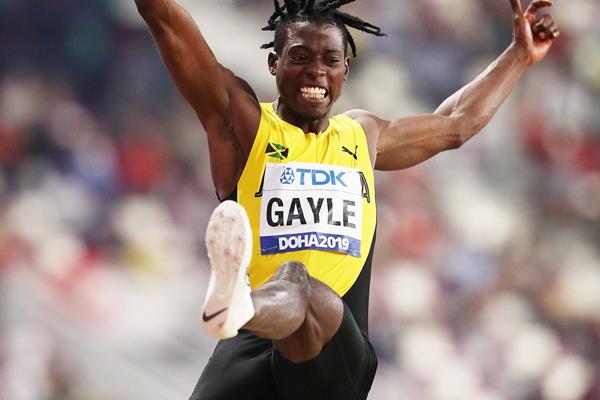 Has there ever been a more tear-stained women’s hammer final? DeAnna Price of the United States was overcome by emotion after building on her first-round lead of 76.87m and confirming victory with a third-round heave of 77.54m.

But Poland’s Joanna Fiodorow matched her lachrymal efforts, and almost her athletic efforts, taking silver with a personal best of 76.35m ahead of China’s Wang Zheng, bronze medallist with 74.76m. The gold and silver medallists then embraced as if they never wanted to let each other go. 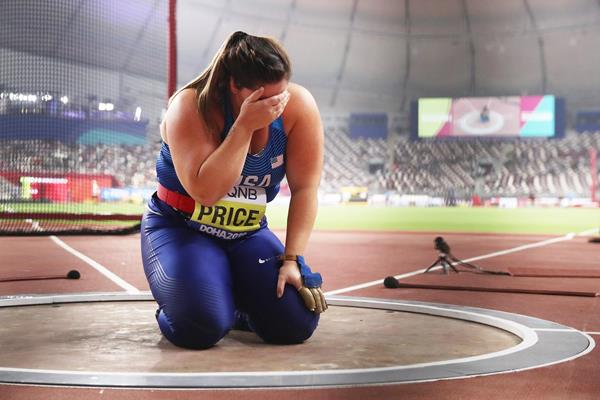 The semi-finals of the mixed 4x400m produced a world record as the United States quartet of Tyrell Richard, Jessica Beard, Jasmine Blocker and Obi Igbokwe reached tomorrow’s final in 3:12.42.

Jamaica was second fastest qualifiers in a national record of 3:12.73, ahead of a Bahraini team that included world 400m silver medallist Salwa Eid Naser, clocking an Asian record of 3:12.74, and Britain, who set a European record of 3:12.80 in this nascent event that will make its Olympic debut in Tokyo next year.

The air-conditioned stadium meant the temperature was pleasant, albeit that it was a steamy evening, and the wind reading was given as -0.2m/s.

Nieta’s British colleague Dina Asher-Smith, European 100m and 200m champion and this year’s Diamond League 100m champion, was the third woman to run sub-11 on the night, winning her heat in 10.96.

Norway’s defending 400m hurdles champion Karsten Warholm ran 48.28 to win his semi final, despite slowing over the final 40 metres with the race won to finish as fastest qualifier to Monday’s final.

His two main rivals, Rai Benjamin of the United States and home runner Abderrahman Samba, also went through after finishing first and second in their semi-final in 48.52 and 48.72 respectively. The Qatari, whose season has been interrupted by injury, was not as smooth as his rival, who equalled his own best time of 46.98 in following Warholm home in the IAAF Diamond League final, but showed his strength as he finished strongly.

Brazil’s Alison Dos Santos is also a medal contender, having won the opening heat in a South American U20 record of 48.35.

Kyron McMaster, the Commonwealth champion and two-time Diamond League champion from the British Virgin Islands, missed one of the two automatic qualifying places by a hundredth of a second behind Turkey’s Yasmani Copello but was then disqualified.

There was very nearly an early exit for another of the pre-event favourites as Poland’s Adam Kszczot could only finish fifth in his heat but squeaked through to tomorrow’s semi-finals as a non-automatic qualifier with a time of 1:46.20.

France’s defending champion Pierre-Ambroise Bosse came safely through his heat on a night when Emmanuel Korir of Kenya and Morocco’s Mostafa Smaili topped qualifying with 1:45.16 and 1:45.27 respectively.

In the men’s pole vault qualifying the big casualty was France’s world record-holder and 2012 Olympic champion Renaud Lavillenie, who has never won a world title, only confirmed his continuing story at these championships as he failed to reach Tuesday’s final, managing only 5.60m.

Another Polish past world champion, Piotr Malachowski, and Germany’s Olympic champion Christoph Harting both failed to qualify for Monday’s men’s discus final after a qualifying competition topped by the Swede who also tops this year’s lists with 71.86m, although on this occasion Daniel Stahl only required 67.88m – the longest throw in a World Championships qualifying round since 2005.

Jamaica’s Fedrick Dacres was second overall with 65.44m, ahead of Australia’s Matthew Denny, who reached 65.08m.

The stand-out athlete in the women’s 800m qualifying was Uganda’s small but powerful 24-year-old Halimah Nakaayi, who bundled her way between leaders Eunice Sum of Kenya and Natoya Goule of Jamaica like a latter-day Steve Ovett before surging on to win the last heat in a season’s best of 1:59.35.

Had Goule not gone on to advance as a non-automatic qualifier, there might have been an appeal but as it was the Ugandan, who had earlier bumped Sum, the 2013 world champion, from behind, advanced without bother.

Hers was the fastest qualifying time for tomorrow’s semi-finals, with Raevyn Rogers of the United States second fastest on 1:59.97, and her team-mate Ajee Wilson, winner of the opening heat, clocking 2:00.31.

The evening had begun with four re-allocated medal presentations from past IAAF World Championships events following the disqualification of original medallists as a result of the retrospective analysis of their samples.