“Grenada will have no difficulty providing some subsidy to LIAT but I am not taking money and give it and say spent it as you want…That is an offer I made since Jean Holder was the chairman,” he told a news conference. 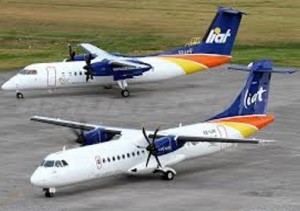 Earlier in the week, LIAT announced that it would be reducing the number of flights to Grenada as of Friday but Mitchell told reporters that following talks between St. George’s and the airline management, the cut has been reduced to just one flight.

Mitchell said that Grenada has an open sky policy and that like St. Lucia, his government is holding talks with the Trinidad-based state-owned airline, Caribbean Airlines (CAL) and other airlines to service the island.

“We cannot sit down and wait,” he said while calling for the management of LIAT to adopt measures that will improve its operations.

Grenada offers marketing subsidy to a number of international airlines to guarantee they service the island.

Earlier this week, St. Lucia’s Prime Minister Allen Chastanet told a news conference having CAL as the national carrier may be the best option for the island given the many issues facing air transport in the region.

The former tourism minister, a harsh critic of LIAT reiterated earlier statements that the airline whose major shareholders are the governments of Antigua, Barbuda, Barbados and St Vincent and the Grenadines cannot solve all of the transportation needs of the region.