Linton was piloting the motion calling on the Parliament “to express its lack of confidence in the leadership of the Prime Minister” when during his presentation that was supposed to have lasted 45 minutes, he was halted after the Speaker claimed he had made a disparaging statement about her.

“I am saying that you sat in the Honourable Chair and you said to the House of Assembly that the demon in you is ordering a member to sit down. You said that not me. What is your beef right now,” Linton said.

“You said you have demon in you that caused you to ask somebody else to sit down. I am asking you now whether the demon in you is operating or whether it is you. That’ is all I am asking, and I am not going to apologise for it,” he added. 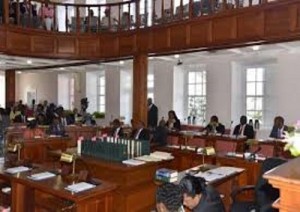 “Those are your words I am not apologising  for it,,” he maintained even as the Speaker insisted that she was in control of the proceedings and that he would only be allowed to continue his contribution if he apologises.

“I am under the impression that the member has concluded his contribution to his motion,” she said, to which Linton replied “the member has not concluded. The member would like to continue.

“But you keep interrupting the member in a very ad hoc manner. I don’t understand what these interventions are all about,” he said asking whether or not he would be allowed to continue.

But the Speaker denied that she was taking part in the debate telling legislators “I was doing my duty.

“The member then suggested that I have a demon in me and said because I said it at some other point that it is okay for him to say so.

“What the member does not realise is that I was responding to something one of his side said and he now cannot say that I have a demon in me which is exactly what he said and I think I am within my right both as Speaker and as a Member of Parliament to point out to him that he is using un-parliamentary language towards me and that he was rude to suggest I have a demon in me,” Boyd-Knights said.

“I am further stating when he apologises he can continue. If he is not willing to continue, can the next member rise to support his motion,” she added.

She said Linton, a former journalist and radio talk show host, must know the difference between sitting in Parliament and sitting before a radio console.

She insisted that that Linton would only be allowed to continue his presentation ‘as soon as you apolgise” to which Linton responded “I am not apologising”.

“Member you just cannot be rude to the chair like this. People are not only hearing they are seeing and that is manifestly wrong of you,” she said.

The exchange of words between the Speaker and the Opposition Leader led to other legislators intervening in order to justify their own positions on the matter.

Boyd-Knights said that she was disappointed at the turn of events noting that “members do not even realise when thy do something that is not right.

“They just don’t even realise it,” she said as she asked whether or not “any member” was going to participate in the debate.

“I am calling on any other member who wishes to speak to do so, I will give you three minutes after that I will put the motion to the vote”.

When the matter was put to the vote and a division taken, the government 14 legislators voted against the motion, with the opposition refusing to participate. There was one abstention.