“Barbados also intends to achieve an economy wide reduction in greenhouse gas emissions of 44 per cent compared to our business as usual scenario by the year 2030.

“These targets will be achieved through a diversified portfolio of renewable energy projects and efficiency energy programmes which include waste to energy, bio-mas, landfill gas to energy and bio-energy projects”.

Prime Minister Stuart told the conference that independent electricity producers will soon be able to sell more electricity on the local grid as 10 additional megawatts will be commissioned this month.

the grid with most of these being solar photovoltaic units,” he said.

He said that another 10 megawatts will be commissioned “and we expect that by this time next year we would have issued licences for 65 megawatts of renewable energy generating capacity to be commissioned by early in the year 2018”.

Stuart said that it was necessary for the region to find less expensive and more sustainable sources of energy. He added that the cost of the importation of fossil fuels in Barbados in 2012 was equivalent to a staggering 9.6 per cent of gross domestic product (GDP).

He said that his government’s vision for the country included enhancing economic growth by reducing energy costs; improving energy security by the reduction of the importation of fossil fuels through the increased penetration of renewable energy and energy efficiency into the energy mix; and reducing the emission of greenhouse gases and pollutants from the combustion of fossil fuels.

In her address, newly appointed EU Ambassador to Barbados and the Eastern Caribbean States, Daniela Tramacere, said that energy is at the heart of economic progress and research and development in renewable energy technologies is increasingly putting new sustainable solutions within reach, as a response to the dramatic and alarming effects of climate change worldwide.

“In this challenging context, Caribbean islands face additional complexities and a number of common needs and problems. Dependency on imported fossil fuels for the majority of our energy needs, scale and isolation and severe impacts of oil price and supply volatility are just few of the many difficulties the region is facing. “

But she said that trends in the development of renewable energy technologies in the Caribbean region are remarkably positive.

“Renewable energy is now featuring high in national energy strategies and climate action plans of the majority of the Caribbean countries. And national targets are being supporting the rise in investments,” she said, adding this conference represents a unique opportunity to push forward the agenda for the Caribbean’s full transition to a renewable, efficient and modern energy service with a structure that has an enduring capability. 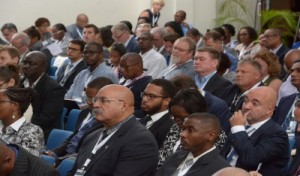 CARICOM Secretary General Irwin La Rocque said renewable energy is a critical component of the effort to reduce greenhouse gas emissions, a key factor in the battle to limit global warming, one of the more harmful effects of climate change.

“Renewable energy also contributes to our climate adaptation efforts,” he said, noting that the theme of the conference “Challenges and Opportunities For Energy Transformation,” “conveys clearly the task that is before us in this sector.

“For this forum to be deemed a success, the discussions should lead to further solutions, particularly as we seek to harness the resources, to maximise our undoubted potential in renewable energy,” he said.

La Rocque praised the European Union (for yet another demonstration of “its commitment to co-operate with us, in support of our efforts at sustainable development.

“The partnership between the EU and the Caribbean has been very beneficial and will be even further strengthened, later this morning, with the signing of a Joint Declaration, along with the European Investment Bank, on reinforced co-operation in the field of sustainable energy.”.