HAMILTON, Bermuda, Oct 10, CMC – Bermuda was placed under a hurricane watch on Monday as the authorities urged residents to batten down and diverted three cruise ships in anticipation of Tropical Storm Nicole that is expected to gain  hurricane strength on Tuesday.

Nicole, the 14th named storm of the Atlantic season, was 415 miles south of Bermuda and moving north at six miles per hour (mph). It is forecast to intensify to a hurricane again as it passes over the area mid-week.

The Bermuda Weather Service (BWS) in its 6.00 pm (local time) bulletin, said that the storm with winds of 60 mph is expected to hit the island as a Category 1 storm on Thursday morning when it will be 25 miles away or directly over this 21-square-mile British Overseas Territory. 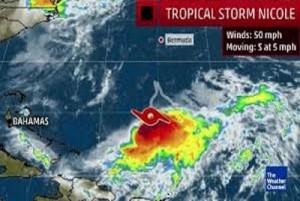 “T.S. Nicole is forecast to intensify to a hurricane as it passes over the area mid-week. Ahead of Nicole’s approach, wet conditions will persist with only a brief respite tonight (Monday) for preparations.

“Expect hazardous conditions, including heavy rain, thunderstorms and hurricane-force winds. Increasing seas and swell will affect Bermuda for the remainder of the week, including dangerous surf and rip currents.”

Earlier, the Miami-based National Hurricane Centre said Nicole was less organised but was still forecast to strengthen on Monday night and Tuesday.

The Emergency Measures Organisation (EOM) has already swung into action, and National Security Minister Jeff Baron has urged residents to make sure their storm supplies are topped up.

Three cruise ships cancelled visits because of weather concerns. The Grandeur of the Seas had been scheduled to arrive in port on Monday, while both the AIDAluna and the Norwegian Breakaway had been expected to arrive on Wednesday.

However, the storms have not affected the Norwegian Dawn, which is already at Dockyard, the major cruise port at the island’s west end.

Nicole, which formed as a tropical storm south of Bermuda last Tuesday, did a U-turn on Sunday night and headed for Bermuda.

Nicole had meandered erratically while intensifying to a Category 2 hurricane with 105 miles per hour winds on Friday.

Bermuda’s only brush with a storm this season came last month when Tropical Storm Karl dumped around four inches of rain on the island but it caused no serious damage.

More in this category: « Caribbean American congresswoman wants US to expedite aid to Haiti CARICOM chairman leading delegation to Haiti and Bahamas »